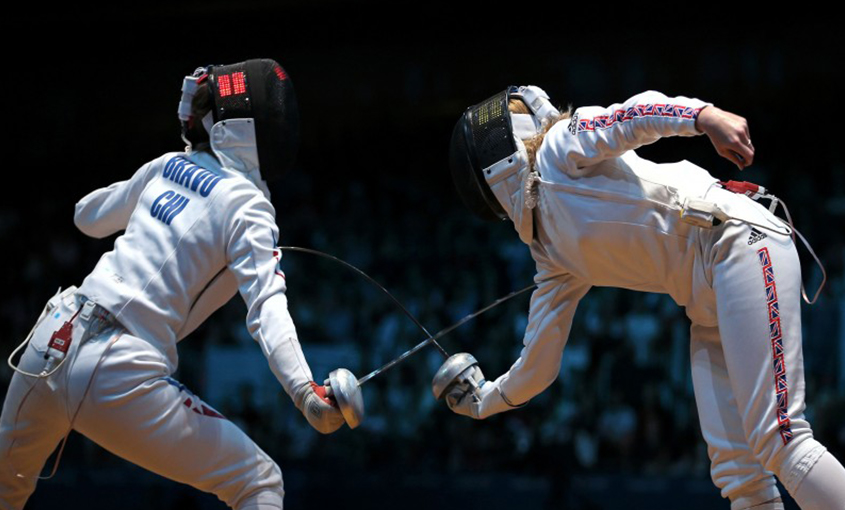 Corinna Lawrence is a fencer from Plymouth, Devon, specialising in the epee-individual event. She enjoyed a fine year in 2009 winning Commonwealth junior gold, Australian Youth Olympic Festival silver and European junior bronze - the latter the best ever result by a British woman at that event.

She won Commonwealth junior gold for the first time in 2006. She suffered with De Quervain's tendonitis from July 2010 to July 2011 and was the only Brit selected for the epee for London 2012.

When and why did you become interested in fencing? What or who inspired you?

My two elder sisters started to learn to fence at school and thoroughly enjoyed it, and as I used to go and watch them at competitions I decided to take it up too. I started when I was seven with foil, and when I was twelve I decided to do epee instead, following both of my sisters' footsteps. When I was younger I used to do every sport; tennis, badminton, swimming, dancing, tae kwondo, netball... but fencing was the sport which my sisters and I enjoyed the most.

Is fencing 'in your blood'? Has anyone else in your family participated in this sport?

My mum always wanted to fence but never had the opportunity, but when my eldest sister (five years older) was given the chance to fence at primary school during Monday lunch times, my mum encouraged her to take part. She enjoyed it a lot and was successful and then my next oldest sister started fencing too, followed by me three years later, and then my brother five years later again. Both of my sisters were very good and represented Great Britain internationally, and my brother has also been regional champion.

Do you have a hero?

I don't have a hero as such, but I have many role models, both athletes and sedentary people; good people who are successful in their own way and have a positive outlook on life, and care for those around them. My fencing role model is Helena Mayer, who was a German Jewish fencer during WWII, who faced Antisemitism and was forced to leave Germany, and she lost her boyfriend in the German army, yet she became a world class fencer and Olympic medalist.

How did your life change when you began fencing?

As I started fencing when I was seven during school lunchtimes, it barely affected me, apart from not getting to run around outside that lunchtime! Each year the volume of training gradually increased and so I had less and less free time, but as this was gradual I didn't notice how it changed my life. It is only looking back after and comparing yourself to other 'normal' people, that you realise that your life changed, but in my opinion, for the better. Due to the organisation that I had to gain, I have been able to do everything that I have wanted to do, and the same things as my friends, just in a more efficient way!

Were you nervous when you first started fencing?

When I first started fencing it was just like any other sport which I did, and my parents always emphasised that we did sport for fun, so there were no nerves; just excitement and making new friends, playing a new sport, and trying to win!

Have you ever been hurt or hurt anyone whilst fencing?

As fencing is a contact sport, you regularly get or give others bruises and the occasional cut due to hitting too hard (could be either fencers fault, or both), but nothing serious that still hurts after two seconds.

Which other sports do you like apart from fencing?

I enjoy watching rugby and tennis, and any major sporting World or European Championships. I enjoy participating in most sports, always giving any sport a go, but weekly I play tennis and/or badminton.

How do you keep fit?

We have a strength and conditioning programme which includes elements of sprint training and gym sessions to help keep us fit and develop fencing specific physical skills.

How much training do you do leading up to a competition?

See below + I take the day off before a competition but otherwise my training volume is the same.

How many hours do you train each day and how often do you have breaks?

See below + we get a week break off training after major competitions (World Championships and European Championships) and occasional weeks throughout the year after intense training periods but not close to a competition.

What does your training consist of?

I train four mornings during the week and on Saturdays as I work every afternoon. I do 17 hours of physical training a week, consisting of two strength/weight sessions a week, two conditioning sessions (sprinting), 4 fencing sessions; including four one-hour private lessons with my coach, and sparring four times a week, for two hours each. It is also important for fencers to have psychology support and performance analysis as part of their training. I have Sundays off and one morning a week where I can relax.

What is the most exciting thing about fencing?

Fencing is exciting because not only does it require physical ability, but tactics, mental strength and a great deal of skill. The variety means that you never get bored of training, and that you can constantly improve.

How do you feel when you are fencing?

When I am fencing I am so focused that I don't actually know what I am feeling. Before I fence, I am nervous though, and after wards if I have won then I am very happy, and if I have lost but have fenced my best then I am satisfied and immediately start analysing so that I know how I can win next time.

Why do you want to be an Olympian?

I have fenced for 15 years and each year I set myself new goals, pushing myself further and further. Naturally being an Olympian was one of the next goals when I got to 20, and with the Olympics in London, I was even more motivated to become an Olympian. There are always things in life which pull you in different directions, and had I not felt that fencing was important, I might have been a doctor by now, or living in a different country. But I chose to fence, and I continued to have it as a priority in my life as I enjoyed it and was successful. As an Olympian, I have competed on the World's largest stage, and that was always one of the best possible achievements in my eyes.

How did it feel winning your first medal? Did you expect to win it?

I won my first fencing medal at my first competition which I was very surprised about because I was only 7, and it was an Under 9 competition. I had only been fencing for a few months, and in the competition I had beaten many boys and people who were older than me and who had been fencing much longer. I remember being very happy that I had won, but immediately wanting more, and wanting to fence and beat the people in age group above me. I think that strive to want to be better and go further from such a young age is why I have been so successful.

What advice would you give to children who do not win a competition they have trained hard for?

We cannot all win every time, and if you work hard and continue to work hard, you will get the result that you want. The best advice I can give is to aim to win, but accept losses and be happy when you have done the best you can do. That way, as long as you have done your best, you always win, and you remain positive and motivated. This can be applied to every situation in your life.

How did you feel when you were beaten at London 2012?

I was actually happy despite having lost in the second round at the Olympics because I had achieved my goal and I lost to a much stronger opponent, World Number 4 and the current European Champion. I knew that fight was always going to be the toughest one that I could have at the Olympics so it's just unlucky that I met her in the second round and not the final! The atmosphere and support at the Olympics was so overwhelming, that I enjoyed every second of my performance and as I fenced to the best of my ability I was happy.

Will you compete in the next Olympic Games?

I am currently training for the Rio 2016 Olympics, but I will not know if I am going until the Spring of 2016 as this is the qualification period.

Do you have a regular sparring partner?

In combat sports you cannot just have one main sparring partner as you learn each other's tactics and skills after a certain period of time, by which time training is less productive so it is important to have a constant variety of sparring partners so everyone benefits fully.

How do you relax? What hobbies do you have?

I work part time for a hedge fund, so during the week I have very little time to relax, but at the weekends I like to play other sports (badminton, tennis), read, and spend time with my friends because an important part of being an athlete is relaxing.

Sum yourself up in 3 words.

Did you do well at school?

Yes, my education was always a priority to me, and due to my excellent organisation and prioritising skills, I ensured that I never fell behind on my school work whilst simultaneously being able to compete at the highest level. I am also a perfectionist and so anything which I do, I put everything in to so that I succeed. Fencing is not as well funded as other sports so you cannot just be a fencer, you need to work as well, and this is why I have always worked very hard at school. As an athlete, your sporting career is relatively short, and so my education is paramount so that I can work when I retire, or if I were to get injured any day. I also think that it is important to have other things in your life than just sport, so that you have other things to focus on and distract you from your sport when necessary to relax, and education and school is a very good distraction.

What are your dreams for the future?

My dream is to win world championship medals and ultimately a medal in Rio 2016.